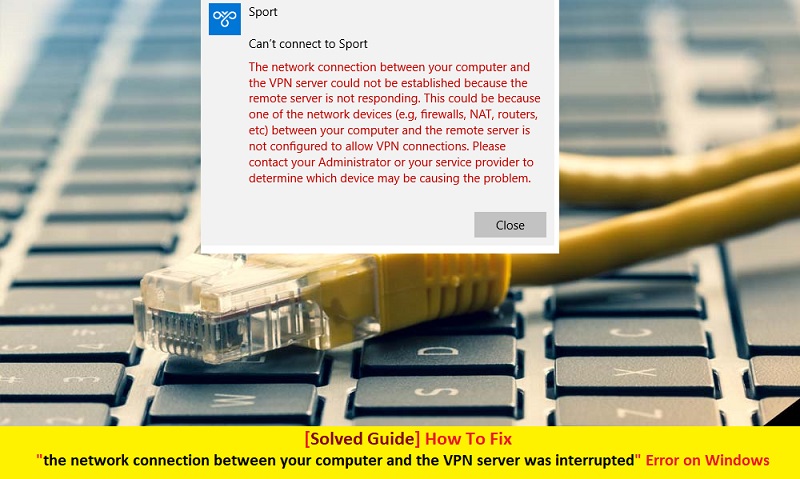 The network connection between your computer and the VPN server was interrupted. This can be caused by a problem in the VPN transmission and is commonly the result of internet latency or simply that your VPN server has reached capacity. Please try to reconnect to the VPN server.

If you are facing “The network connection between your computer and the VPN server was interrupted” Error on PCs/Laptops while trying to set up a VPN Server on Windows 10 or other OS versions, then you are in right place

In this article, will are discussing about this VPN Server issue in details and providing some recommended methods/procedure to fix this issue on Windows 10 device. Let’s start the discussion.

“Virtual Private Network (VPN)” technology lets a computer using a public internet connection join private network by way of secure “Tunnel” between that machine and the network. This technology protects the data from being seen on tampered with by bad actors or unauthorised users. VPN support Consumer VPN services that allows individual users to surf the internet privately from home or public setting, and business-oriented solutions that allows the employees or business users to securely connect to corporate network remotely.

Moreover, VPN (Virtual Private Network) connections are controlled by custom software like Cisco AnyConnect, OPenVPN and others. Another option that is generally supported by the most virtual private network is to use “Microsoft’s built-in VPN Client” which is useful when some VPN don’t provide their own client of if you want to use VPN protocol not supported by your VPN’s client. Like IKv2.

Now comes to matter “The remote connection was not made because the attempted VPN tunnels failed”, many users have already reported about this error massage on various online platforms including Microsoft official online platforms and other popular platforms, and asked for the solution. Users explained that the following error message appears on Screen when trying to connect or set up a VPN server on their Windows 10 OS based device.

“The network connection between your computer and the VPN server was interrupted. This can be caused by a problem in the VPN transmission and is commonly the result of internet latency or simply that your VPN server has reached capacity. Please try to reconnect to use VPN server. If this problem persists, contact the VPN administrator and analyze quality of network connectivity.”

Performing these steps can help you restore the connection between you and the VPN server. If your connection was interrupted, it could be caused by the following:

More often than not, restarting your computer (the client PC) should fix the issue. So you might want to start with that.

If the server is not responding

In this case, you’ll usually see something along the lines of the network connection between your PC and the VPN server could not be established.

If the server is not responding and you can’t establish a connection to your VPN server, try the following fixes:

I resolved this issue by:

2) Click Security tab. Make sure Type of VPN is set for Automatic (mine was set for PPTP)

This resolved my issue. Hopefully it will yours.

The following steps could help you to diagnose and resolve error 807:

1-Check out if you are using the correct Hostname or IP address.

2-Make sure that you internet connection is working properly, if not then reset the adapter or modem, as the case may be.

3-Ping the VPN server to ensure it is available. For this, click “Run” after clicking the “Start” button on the windows screen. Type “Ping” followed by the name of your VPN server or IP address. Press enter. You will come instantly come to know if the server is working or not, in the resulting DOS screen.

4-Confirm your computers firewall settings are still configured to permit traffic to and from your VPN. As you are using PPTP protocol, TCP Port 1723 and GRE Protocol 47 must be opened/enabled.

5-If any of the antivirus installed at your system is causing the problems in VPN connection than remove it or alternatively, add the the IP of remote client in its configuration settings.

6-If you are able to connect to VPN from your desktop but not from your laptop, it could be probably due to security software such as Microsoft OneCare that is quite capable of blocking GRE, uninstall it and check out the results.

hopefully it will work

VPN Error 807 is a common VPN Error which may occur due to following reasons:

You can follow these simple solutions to fix VPN Error 807

PPTP/GRE ports not passing through my Firewall

Thank you for the quick response.

I thought, from the angst and frustration of my users I was going to be on the next “Ow, my Balls!” TV show contestant.

I did some testing and found that this server cannot get out onto to the Internet. I cannot ping www.yahoo.com or browse the Internet.

First off, Id like to thank everyone for their suggestions. I really appreciate the help out there….